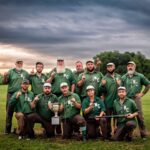 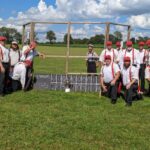 The Quicksteps of Spring Hill captured their first pennant with a victory over the Franklin Farriers on Sunday, August 28th. The regular season ended with a standings tie between the Emmett Machinists of Knoxville and reigning pennant champions, the Stones River Scouts, but the Quicksteps had the advantage on tiebreakers. They’ll be seeded #1 at the upcoming Sulphur Dell Cup Tournament, to be held September 10th and 11th at their home grounds of Rippavilla in Spring Hill, Tennessee. 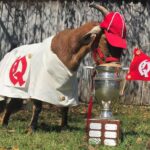 Returning to Middle Tennessee for the first time since 2019, the 2022 Sulphur Dell Cup will be played at Rippavilla in Spring Hill on September 10th and 11th. The Quicksteps, the 2022 league pennant winners will be defending their 2021 championship, as well as hosting. Matches commence at 10am on Saturday morning and will play every two or so hours throughout the afternoon. On Sunday, the 2022 champion will be decided. 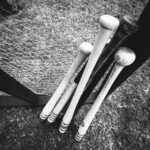 In 2022, the membership of the Tennessee Association of Vintage Base Ball will elect a new Vice President, with current Vice President Rocky “Stonewall” Jackson ascending to be the new Commissioner of Base Ball. The election will be held electronically and members will be able to vote the week of the Sulphur Dell Cup, with the results announced at the Sulphur Dell Cup Banquet the evening of September 10, 2022. Here are the candidates, and their biographies as provided by the candidates.

Kenneth “Stitch” Douglas – Nashville Maroons
I have been hooked on Vintage Base Ball since 2018 when I came across some vintage base ball teams
playing in a field at the Tennessee Boys’ Home during a Ham Fest in Spring Hill and was instantly
intrigued. This led to meeting Hamspoon and Trapper weeks later at the Sulphur Cup. They read my
interest in the game and encouraged me to become a member of the association. I have played with the
Maroons since 2019.

I grew up in San Diego with a love for the Padres. I was an active kid playing just about every sport,
although baseball was always my favorite. The Boys Scouts were also an important part of my
upbringing. I learned survival skills, camped, and hiked with my troop, even reaching the 14,500-foot peak
of Mt.Whitney, twice. This commitment led to me becoming an Eagle Scout.

In college, I received two degrees in both fire science and nursing. I fought forest fires briefly in Utah and
then ultimately chose to pursue a full-time nursing career. When I moved to Tennessee with my family
seven years ago, I continued to work as an ER nurse, but also became a realtor, and started my own
quail and rabbit business.

My beautiful wife April and I have a blended family of five boys (21, 20, 16, 15, and 12), and one girl (18).
My family is very supportive of my passion for base ball and attend most games. Our youngest son
Memphis can’t wait to turn 18 so he can join the Maroons.

During my time in the league, I have been dedicated to the association, and my team. I was nominated
and currently hold the position of Captain of the Maroons. Additionally, I have represented TAoVBB in
multiple extracurricular matches including St. Louis, The Ohio Cup, Rickwood Field and other invitational
events.

I’d be honored to be considered for the position of Vice President of the league. I’m committed to serving
TAoVBB. I would love to not only grow our following, but also help improve best practices, add new
venues, and implement community partnerships.

Seeking the position of Vice President on the TAoVBB Board of Directors.

It has been a pleasure to share the field this year with the fine ballists of the Tennessee Association of Vintage Base Ball. Our wonderful venues and incredible sportsmanship truly embody the mission of the league.

I am coming to you in hopes I can get your vote of confidence to be VP and subsequently serve as your next Commissioner. I have a B.S. in Mass Communication from MTSU and an MBA from UTC. I currently work for the Tennessee Valley Authority as a manager of IT Maintenance and Subscriptions.

Previously I have served as Captain of the Mountain City Club and league Treasurer, where I have worked toward building a better bond with our fellow ballists that love this sport and league we call a family. If I am elected, I will be committed to the players of this league, with hopes to increase our community involvement in an effort to support the venues we call home.

Jamie “Séamus” Wright – Nashville Maroons
I was born and raised in Nashville, TN. I’m 48 and have been a part of the TAOVBB and playing for the Maroons every year except for the inaugural season. I’ve been a professional photographer for the last 28 years. Two of my strongest passions are photography and playing in this wonderful league. If elected, I promise to work hard and be fair to everyone during my tenure.  I love the gentlemanly aspect of this league and I’ve always strived to keep that in the forefront of my mind for the respect I have for everyone and the TAOVBB.

Collin “Lefty” Bradley – Phoenix of East Nashville
My name is Collin “Lefty” Bradley and I would like to run for the position of Middle Tennessee Player Representative within the Tennessee Association of Vintage Base Ball. I play for the Phoenix of East Nashville ball club and have been playing with this ball club for 5 plus years now. I also enjoy traveling with the Hog and Hominy to out of state festivals and just enjoy any chance I can at playing ball. I have mostly been just a player, spectator, and overall fan of vintage ball, but I felt now that I have been in the league for a while it was time to try and be an even bigger part of the association. A little more about myself. Besides playing base ball I am an avid bowler in the middle TN area. I participate in many leagues throughout the fall and summer and just recently I was able to shoot a new high series of 809 for a 3 game set. I also play slow pitch softball and sandlot baseball whenever I get the chance. If you can’t see a trend I just enjoy sports and the camaraderie that follows suit with it. I hope that by being elected the area rep for middle TN I can help be the voice of the players and keep this great game of base ball we play to a high standard and an even higher level of fun and enjoyment. 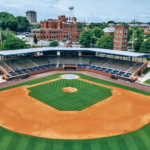 The Hogs & Hominy Picked 9, the Tennessee Association of Vintage Base Ball’s travel squad, will be participating in the annual Duke Homestead Vintage Baseball Game, to be held under the lights of the historic Durham Athletic Park, Saturday, September 24th commencing at 5pm. The Hogs & Hominy will be playing a doubleheader under the lights for the first time in league history.